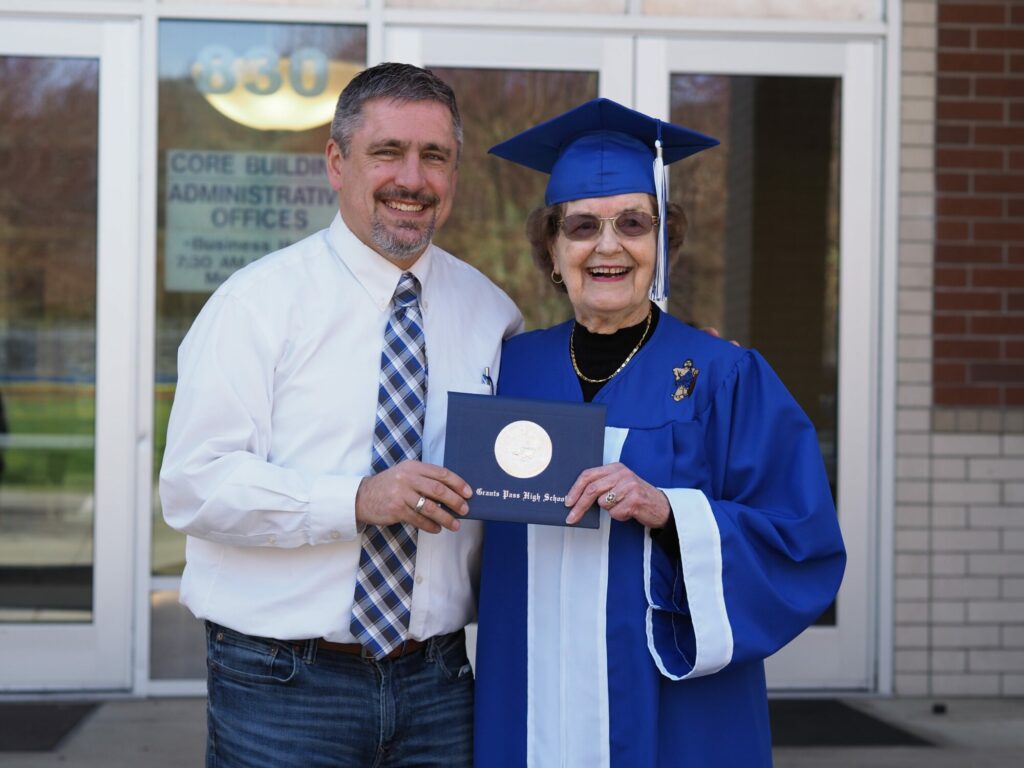 GRANTS PASS, Ore. – A 94-year-old woman who grew up in Grants Pass during the Great Depression finally got her high school diploma.

She told the students in attendance she thought it would never happen, but reminded them to never give up.

Grace’s granddaughter, Juliana, wrote the following story about her life:

My grandmother, Grace Omann Hesketh Gourley Manthey, was born on Dec. 12, 1927 in Milwaukie, Wisconsin, the 10th of 12 children.  By the time she was of school age in 1933, the family had moved and was well settled in the drafty farmhouse where she was raised on Sleepy Hollow Loop in Grants Pass.  The Great Depression had also arrived and settled in, sinking its teeth into them.  The older children left home to support themselves and the remaining 5 worked the odd jobs of children.  During the summer of her ninth year, Grace remembers picking hops at Paul Schroeder’s hop yard where she earned a horrible rash and $2.00 for her efforts. She gave her $2.00 to her mother to help the family, as did her siblings.

Through grades 1-8, from 1933-1941, Grace attended Jerome Prairie Elementary School. It was a small 4-room school house with two grades in each room.  She and her siblings walked the 3 miles to and from school each day.  They had to walk barefoot “Because back then,” she says, “the Depression split people into 2 categories:  the rich and the poor.  We were the poor.  Each of us had just 1 pair of shoes, and those were for church.”

She says when she was 6 years old she remembers she would get so tired on the long walks that her two older brothers would each take an arm and help her home.  After a few years, the bus driver threatened to quit if the school didn’t allow him to change his route to include the Omann kids.  After that, the Omann kids rode the bus and she recalls, “It was an exciting time for us.”

Grace loved school.  Her favorite subjects were spelling, arithmetic and penmanship.  She entered all of the spelling bees she could.  She enjoyed writing poems and still remembers some of them (but is too shy to share them).

Ninth grade heralded the start of high school and the transition from Jerome Prairie to Grants Pass High School.  Although Grace enjoyed her classes, spending time with friends during the school day and playing baseball, due to family finances she had to leave GPHS after just one year.  Thankfully, she was able to continue her schooling through 10th grade at St. Mary’s Academy in Medford.  She remembers the nuns who taught there as being kind.  They taught the girls how to dance and how to make beds properly with square corners.  They played baseball with them.  In exchange for tuition, room & board, Grace was able to complete 10th grade by working at the Academy.  She cleaned the bathrooms at the 3-floor institution, swept and mopped floors, dusted, served many meals and cleaned up after meals.  It was hard, demanding work and resulted in her missing study time during the school day and staying up late at night to keep up with school work.  She was just 15.

Following 10th grade Grace had to quit school permanently to work full time in order to help pay rent at her older sister’s house.  It grieved her deeply to not be able to finish school and graduate with her friends.

Grace’s father instructed his children to “never be satisfied, always try to better yourself”.  She took this to heart and remained determined to earn her high school diploma.  In early 1962, twenty-nine years after having to leave school to go to work, Grace returned to Grants Pass High School to re-enroll as a student.  Sadly, she was told that as a married woman and mother, she was too old to return to high school and therefore couldn’t earn a diploma.  Instead, she was directed to the G.E.D. program offered in Medford.  So with 3 small children at home (ages 8, 5, & 3),  Grace drove nights from Murphy to Medford until successfully completing the G.E.D. course, passing the exam “with flying colors”.  Her G.E.D. was awarded on April 13, 1962 at the age of 34.

I’m familiar with Grandma’s G.E.D. story, but it wasn’t until recently that it really sunk in and I realized that when recalling it she would add, “but i wish I could have gotten my diploma.  I really wanted my diploma; it just wasn’t possible at the time”.   And then to really consider what it represented for her to return to high school as a wife and mother, determined to achieve something that had been so close to her grasp but taken from reach for decades.  By all accounts, one would read of her experiences and wonder why, after walking barefoot in all sorts of Oregon weather for miles to and from school, being pulled from all friends and family after 8th grade, then being worked to the bone in exchange for education the following year, she wouldn’t just be glad to move on and have school behind her permanently.  The reason is simple yet profound: she kept going because it mattered to her.  She wanted to achieve her goal- no matter how long it took- because completing her education was so important to her.

My son is a freshman in college and is changing his major.  He was uncertain as to whether or not to do it because he’s missing a required class that would set him behind immediately.  “If your great-grandmother went back to school at the age of 34 with a husband and three small children at home,” I encouraged him, “you can definitely take a summer class and catch up.”  He paused and replied, “That’s right.”

I’m thankful for my grandmother and the wonderful example she set for future generations.  She’s lovely and kind and truly lives up to her name.  You’d never know by sharing a coffee or an afternoon with her the determination that runs deep within her.  Awarding her this high school diploma recognizes not only her achievement, but the perseverance she showed under difficult circumstances.  It’s a beautiful capstone to her story and she is truly a woman worthy of this honor.