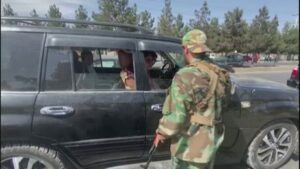 KABUL, Afghanistan (NBC) – The United Nations’ stockpiles of food in Afghanistan could run out this month, threatening to add a hunger crisis to the challenges facing the country’s new Taliban rulers as they try to restore stability after decades of war.

The U.N.’s humanitarian chief in Afghanistan said Thursday that about one-third of the country’s population of 38 million doesn’t know if they will have a meal every day.

The World Food Programme has brought in food and distributed it to tens of thousands of people in recent weeks.

But with winter approaching and a drought ongoing, at least 200 million dollars is needed urgently to be able to continue to feed the most vulnerable Afghans, according to the U.N.

The Taliban, who seized control of the country ahead of the withdrawal of American forces this week, now must govern a nation that relies heavily on international aid and is in the midst of a worsening economic crisis.

In addition to the concerns about food supplies, civil workers haven’t been paid in months and the local currency is losing value.

Most of Afghanistan’s foreign reserves are held abroad and currently frozen.