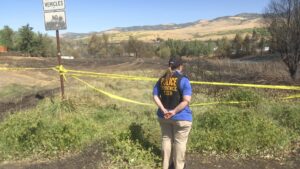 ASHLAND, Ore. — The Almeda Fire started on the North side of Ashland.

Police say it’s believed to have sparked at the BMX park by Almeda Street and Michelle Avenue.

We’re told investigators spent the day speaking with witnesses and neighbors trying to verify where the fire started and how.

Whether it was intentionally set or not is still to be determined, but police say it is a criminal investigation.

One person was discovered dead in the area where the fire sparked.