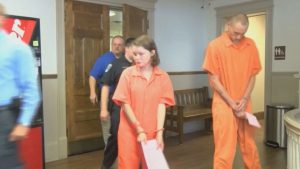 Magnolia, Ark. (NBC News) – Two parents were in an Arkansas courtroom Wednesday because police say they delayed taking their new born baby to the hospital after she’d been nearly eaten alive by rats.

The young couple is in jail, and their 2-week old daughter is hospitalized with more than 100 rodent bites on her arms, body, face and fingers.

Hospital staff says one wound was so severe, her skull was exposed. So they called police.

The Magnolia Police Department arrested 19-year-old Erica Shryock, and 18-year-old Charles Elliot and charged them with endangering the life of a minor.

The parents said they knew they had a rat problem, but did nothing about it.

Shryrock told police she put the baby asleep and when she woke up to screaming two hours later, she was covered in blood.

Elliot said he tried to clean up the bloody rodent footprints all over the baby’s bed.

Doctors said the baby is recovering, but had to go through reconstructive surgery to her face.