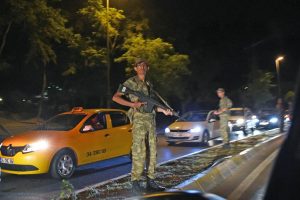 A Turkish security officer stands on guard on the side of the road on July 15, 2016 in Istanbul, during a security shutdown of the Bosphorus Bridge. BULENT KILIC / AFP – Getty Images

Istanbul, Turkey – The Prime Minister Binali Yildirim said a group within the Turkish military engaged in what appeared to be an attempted coup.

NBC News reports Yildirim did provide details, but said Turkey would never allow any “initiative that would interrupt democracy.”

Two major Istanbul bridges were closed with armed security standing on the side of the road.

“There are certain groups who took the arms trusted to them by the state and pointed them toward state employees,” Yildirim said on NTV, according to the AP. “We shall determine soon who they are. Our security forces have acted against these groups.”