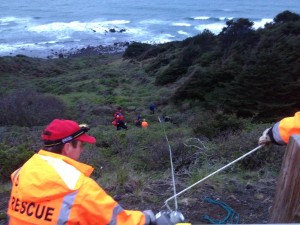 Curry County, Ore. – A body has been found in a pile of driftwood along a Port Orford area beach. Police say the person appears to have been deceased for quite some time.

According to the Curry County Sheriff’s Department, a Port Orford resident was walking along the beach between Rocky Point and Humbug Beach when they happened to see remains of a deceased man near the shoreline. The Oregon State Police were notified and responded along with the Curry County Sheriff to the area of the reported sighting.

Due to the remote location, officers say that additional resources were called in to help recover the body.  Several members of the Curry County Sheriff’s Search and Rescue team arrived and used ropes and a portable winch to carry the body around 300 yards up a steep slope from the beach to the highway.

Once recovered, the body was released to Redwood Memorial in Brookings.

Oregon State Police are continuing the investigation and are trying to establish the identity of the deceased man.

Police are encouraging the public to contact the Oregon State Police if they have any information.