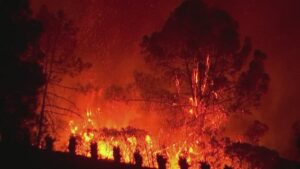 CALISTOGA, Calif. — Multiple wildfires have now merged into one disastrous blaze in Northern California. Hundreds of structures have been destroyed in wine county and more than 10,000 are still threatened.

The number of homes and structures destroyed by wildfire is likely to grow in the days ahead. Right now, that number stands at a few hundred. But officials say the fire simply blew through so many communities so quickly, they’ve been focused on stopping the forward spread and haven’t had an accurate count of the number of homes destroyed.

Wednesday, more than 20,000 remain under threat and tens of thousands of people have been told to be ready to evacuate.

The fire, which was burning in multiple areas, has now converged into one monster blaze after different flanks of the fire began to make separate runs.

Across the State of California more than 20 massive wildfires are burning. Some 18,000 firefighters are on the front line. But, for now, it remains one of the most dangerous places they have faced in some time.