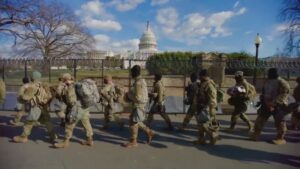 Followers of the QAnon conspiracy theory and other extremists believed Thursday was the day Donald Trump would be truly inaugurated president.

The warning was enough for the House of Representatives to take the extraordinary move of calling off its daily business, though Speaker Nancy Pelosi played down the closure and dismissed the conspiracy theories.

“It falls into the realm of… let’s not waste our time on it,” Pelosi said.

While some Senate staff were told to stay home, that chamber opened for business.

Lawmakers recognize the threats from extremists aren’t going away.

“This ongoing threat of these militia groups is going to be with us long after today,” Virginia Senator Mark Warner admitted.

Capitol Police have requested National Guard soldiers remain at the Capitol another two months, warning militia groups that attacked on January 6th are still making plans, including an attack linked to President Biden’s yet-to-be scheduled address of a joint session of Congress.