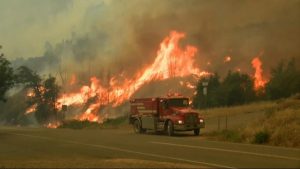 Governor Jerry Brown declared a state of emergency in two counties because of the Carr Fire. So Far Cal Fire says one person has been killed, a private hire dozer operator.

The fire has already scorched more than 28,000 acres and at least 15 structures have been destroyed.

Mandatory evacuations are in place in parts of Shasta County and Redding. Officials are telling people to be prepared to leave at any moment.

The fire began Monday in Whiskeytown National Recreation Area. It was caused by a vehicle mechanical failure.