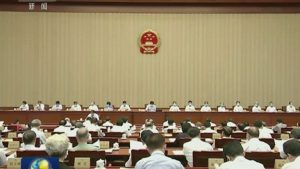 BEIJING, China (NBC) – China’s government has passed a sweeping new security law for Hong Kong, behind closed doors with no debate and a vote that was unanimous. The official line in Beijing is that it’s necessary for stability.

For many people in Hong Kong, this is being called a “dark day.” The new law targets anything that smacks of criticism of China. Namely, months of protests last year that, at times, were violent and that Beijing vowed to stop.

China’s government will set up its own security arm in Hong Kong to investigate and enforce the crimes under the new law, which carry a punishment of up to life in prison.

Chief Executive of Hong Kong Carrie Lam said, “It will only target an extremely small minority of people who have breached the law, while the life and property, basic rights and freedoms of the overwhelming majority of Hong Kong residents will be protected.”

The U.S. State Department now says it sees no difference between Hong Kong and mainland China when it comes to trade, so it will end Hong Kong’s special status.

Officials claim they don’t fear sanctions those who support the law believe the majority of people in Hong Kong won’t be affected. But that’s doing little to ease fears that rights will be eroded, and that a way of life in Hong Kong may be over or at the very least, under threat.