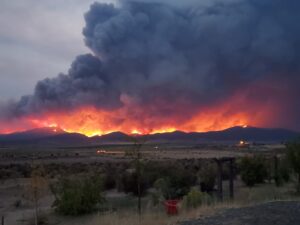 LAKE COUNTY, Ore. – A wildfire that was first discovered Tuesday in the Lakeview Ranger District reached over 20,000 acres in size.

The Forest Service said the Cougar Peak Fire was found at about 1:45 p.m. on September 7 approximately 15 miles northwest of Lakeview and about 1.5 miles east of Cottonwood Campground. By 4:30 p.m., it was estimated to be 60 acres in size and growing rapidly. An evening update sent out just before 10:00 p.m. put the fire at about 1,500 acres.

Thursday morning, the fire was estimated to be 25,000 acres in size with 0% containment.

On Wednesday, Oregon Governor Kate Brown declared the fire a conflagration, which allows state resources to be deployed to help fight the Cougar Peak Fire.

Smoke is highly visible in the area and drivers are asked to use caution.

Cottonwood Campground was evacuated and recreation sites in the area were closed due to the fire.