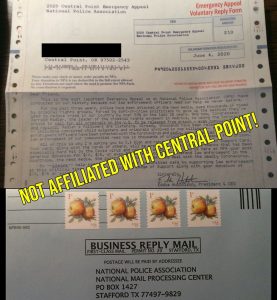 ENTRAL POINT, Ore. – Central Point Police are warning about a notice they say residents are receiving that preys on their goodwill.
Some community members have gotten the notice pictured here. It claims to be an “emergency appeal” from the National Police Association. The letter asks people for contributions. The return envelope would have people send that money to a PO Box in Texas.
The Central Point Police Department says the letters are not from their organization, or any group they endorse.