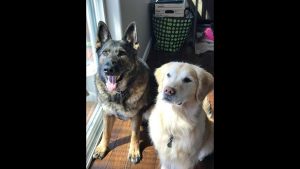 KCTV reports Kara and Joseph Swindle along with their two kids hopped aboard a United flight to Kansas City Tuesday. When they arrived at their destination, they went to a cargo facility to pick up Irgo, their German Sheperd, slated to arrive on a different flight.

However, Irgo had been mixed up with a Great Dane. The Swindles later learned their dog had been put on a flight to Japan, where the Great Dane was supposed to go.

Officials tracked down Irgo in Japan. He will be seen by a veterinarian and shipped back to Witchita.

According to the Swindles, they were told by United the mistake may have been made in part due to similar kennels.

“At this point, all I can do is be hopeful that my dog is going to be okay and return safely,” Kara Swindle said. “I don’t know what else to do at this point. I can’t cry anymore. I’ve cried too much.”

“An error occurred during connections in Denver for two pets sent to the wrong destinations. We have notified our customers that their pets have arrived safely and will arrange to return the pets to them as soon as possible. We apologize for this mistake and are following up with the vendor kennel where they were kept overnight to understand what happened.”

This is the second national incident involving a dog and United Airlines in recent days. Earlier this week, a small dog died after being placed in an overhead bin.