MEDFORD, Ore. — Dutch Bros officially went public Wednesday, with the largest initial public offering in Oregon history, according to Forbes. Similar to it’s drinks, the IPO continued to make the community buzz, up by over 50 percent at closing time.

In 1992, Travis and Dane Boersma launched Dutch Bros, growing from a pushcart, to a drive-thru, to 471 drive-thrus across 11 states. Now Dutch is launching its latest endeavor.

The company went public under the ticker ‘BROS.’ “You know it puts Grants Pass on the map, which Dutch Bros already has done and it’s just exciting,” said Josie Molloy, President and CEO of the Grants Pass Josephine County Chamber. It’s share price jumped 59 percent from the initial public offering, closing at just over $36.

The company sold over 21 million shares Wednesday, raising $484.2 million at a valuation of about $3.7 billion. “It shows you that no matter what you can be successful and grow, it gives everyone hope,” said Molloy. 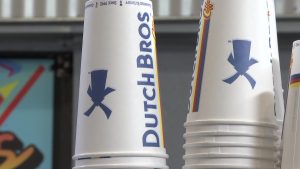 According to the Bloomberg Billionaires Index, executive chairman Travis Boersma is the largest shareholder in the company. His stake, worth 2.3 billion dollars.

Forbes confirms BROS is the largest IPO in Oregon history, raising more than Nike and Columbia Sportswear did in 1980 and 1998 respectively, adjusted for inflation.