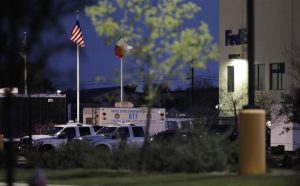 No one was hurt, although one employee standing near the explosion was treated and released after complaining of ringing in her ears, Schertz chief of police Michael Hansen said.

The package “had been traveling along the automated conveyer when it had exploded,” Hansen said during a press conference on Tuesday morning. “We were very fortunate that there were no injuries.”

The FBI and the Bureau of Alcohol, Tobacco, Firearms and Explosives were assisting with the investigation. Authorities cautioned it was still too soon to determine whether the explosion was related to the incidents in Austin.

“We do not know at this point,” FBI assistant special agent in charge James Smith said. But, he added, “Right now we have no indications that there are any issues or threats to the public here in Schertz.”

Hansen said police were “confident that neither this facility nor any location in the Schertz area was a target.”

Authorities were still sorting through evidence, and weren’t able to comment on where the package was destined for, or whether there was a return address on it.

Residents in Austin have been on edge after four bombings that have killed two and injured four others in under three weeks.

Authorities say a “serial bomber” is at large and warned that the devices appear to be getting more sophisticated.

The latest Austin blast occurred Sunday evening when two men received non-life-threatening injuries after apparently setting off a tripwire in the southwest of the city.

Since March 2, there have been three other devices that blew up. Unlike Sunday’s, which had been left next to a fence, the others were placed outside homes.

“With this tripwire, this changes things,” said Christopher Combs, special agent in charge of the FBI’s San Antonio division, during a news conference on Monday, referring to Sunday’s explosion. “It’s more sophisticated, it’s not targeted to individuals … a child could be walking down a sidewalk and hit something.”

The FBI has sent 350 special agents to Austin as well as extra bomb squads.

Austin Police Chief Brian Manley said his department was aware of the Schertz incident and was working with federal partners on the investigation.

He reminded the community to “pay close attention to any suspicious device, whether it be a package, a bag, a backpack or anything that looks out of place” and to call 911 instead of approaching such items.

FedEx also said it was working with law enforcement.

This article originally appeared on NBCNews.com