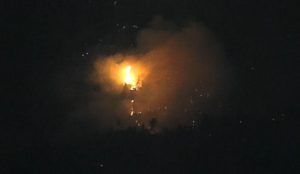 LOS ANGELES, Calif. — Firefighters in southern California are trying to gain control of the region’s first major wildfire of the season.

The fire is over 26,000 acres and is 15% contained. At least one home and two outbuildings have been destroyed by the Apple Fire in the mountains east of Los Angeles.

Cal Fire investigators say the fire was sparked Friday by a malfunctioning diesel vehicle. The vehicle emitted burning carbon from its exhaust and that lit the dry brush on fire.