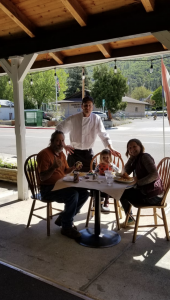 FORT JONES, Calif. — A Fort Jones restaurant that opened just before the pandemic hit has been struggling to survive.

And now, it may never reopen.

Managing owner of ‘Valley Market & Cafe’ Erika Bjune says they opened their doors in early February, but within weeks were forced to close and move to a takeout model.

Bjune says that almost killed the business right out of the gate, which didn’t have a customer base just yet.

Because they’re such a new business, Bjune says they didn’t qualify for any of the stimulus loan programs and could only get small amounts, which didn’t make it worth applying.

With California’s second mandated closure earlier this week, she says it’s deja vu all over again.

This time around, Bjune says, they don’t have the financial ability to do a take-out model.

She says they had to let go of some new hires and don’t have the cushion of startup cash they burned through during the first mandated closure.