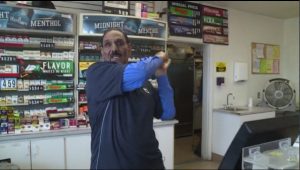 Lockeford, Calif (KOVR) — Mohammed Siddique is at the Tower Food Mart on Highway 88 in Lockeford almost every day – it’s what he does. As he was wrapping up his shift last Monday afternoon, he took a break and sat down at the register.

Siddique said, “I was sitting here and they came in there.” Siddique said that’s when the man and woman, walked in and immediately started making threats and demanding cash. They were both armed.

Before you know the two suspects hit the door, running straight for an alleged getaway car. Siddique was right behind them hoping to get their license plate number. He said, “I look at the car there. The car run fast away.”

The two can be seen on video hopping in the car and drive away in a hurry. They made a u-turn and sped down the street. “I go call the police department and then the police come,” said Siddique.

Siddique said gun, knife or whatever – his plan was to take them both out with one stroke, “Yeah I kill them.”