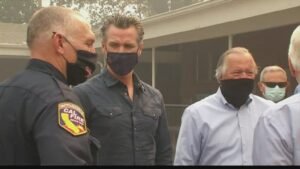 On Thursday, October 1, the governor surveyed places in St. Helena scorched by the Glass Fire.

While there he met with residents and local leaders impacted by the natural disaster.

The governor said he is committed to decreasing the number of wildfires in the state but blames climate change as the reason for extreme weather in recent years.

“We’re seeing hots getting much hotter, the dries getting much drier,” the governor said. “We’re seeing what traditionally have been smaller containable fires become unprecedented mega-fires. We’re dealing with extremes that scientists have predicted. We’re dealing with temperatures that have objectively, not subjectively, are hotter than they ever been in modern recorded history in the state of California. So many of the things we projected and predicted would occur in 20, 30, 40 years are taking place today.”

Newsom has declared a state of emergency for Napa, Sonoma, and Shasta Counties.