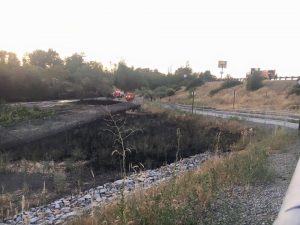 According to Medford Fire-Rescue, the fire was reported near the north Medford interchange at 6:48 p.m. Crews responded and had the blaze contained by 7:12 p.m.

Firefighters say no ignition sources were observed in the area, but witnesses are being interviewed by police in order to gain more information.

The investigation into the incident is still ongoing.