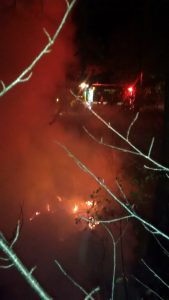 Wilderville, Ore. – Crews responded to a fire burning brush and blackberry bushes in the 500 block of Redlands Drive in Wilderville around 3:40 Thursday morning.

Rural-Metro Fire said multiple agencies responded to the actively burning half-acre fire. They were able to quickly line the fire and contain it. Structures were nearby the fire, but none were threatened due to the rapid response.

An Oregon Department of Forestry investigation revealed the fire originated from malfunctioning switching equipment on a power pole.