Donations can be made online at United Way of Jackson County or by texting FIREFUND to 26989.
Home
Local
News
Top Stories
Haze over Rogue Valley caused by Siberian wildfires, NWS says 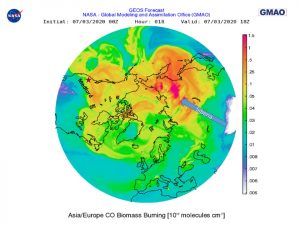 MEDFORD, Ore. – The source of the mysterious haze covering Southern Oregon has been pinned down to wildfires in Siberia.

Wildfires have continued to spread through fields in the Republic of Sakha on the back of the heatwave which hit the entire Russian region. There are currently 50 active bushfires on the territory of 1.5 million acres, according to Avialesokhrana, the Russian government agency that monitors forest fires.

Smoke set aloft from the fires has finally drifted over the Arctic and into the Pacific Northwest, according to the National Weather Service. Computer modeling from NASA’s Global Modeling and Assimilation Office shows the high levels of carbon monoxide emanating from the fires.

According to the NWS, there are currently no local fires contributing to the haze.