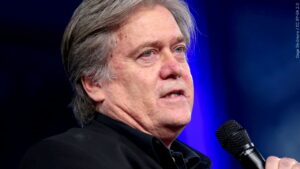 The House voted largely along party lines with just nine House Republicans voting for the resolution to charge Bannon with contempt of Congress.

The resolution allows the matter to be handed over to the Justice Department which will then decide whether to pursue criminal charges against Bannon.

Bannon has argued that the House cannot demand his testimony and documents because it is protected under executive privilege. Former President Trump’s lawyers have made a similar argument. But the committee asserts that Bannon was a private citizen when he spoke to then-President Trump ahead of the attack on the Capitol.

Garland said would follow “facts and the law” on whether to charge Bannon with contempt of Congress.