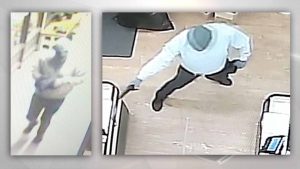 TRINIDAD, Calif. – Police in Northern California are trying to track down an armed robbery suspect.

The Humboldt County Sheriff’s Office said on the night of July 1, deputies responded to a report of an armed robbery at a business in the 300 block of Main Street in the coastal town of Trinidad.

Deputies determined a man entered the business, pointed a handgun at two employees and demanded cash from the store’s register. He then assaulted an employee before fleeing with a large amount of cash.

The suspect may be associated with a newer model white Chevy truck that drove southbound on Highway 101 at a high rate of speed after the robbery occurred.

The sheriff’s office described the suspect as a white man, about 6 feet tall, wearing a gray long-sleeved shirt with dark jeans, a ski mask, and gloves.

Anyone with further information is asked to call the Humboldt County Sheriff’s Office at 707-445-7251.