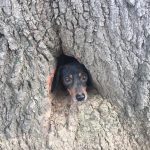 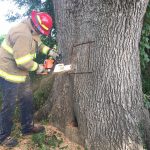 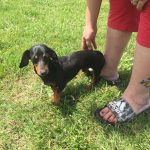 Salem, Ky. – One Kentucky canine found himself in a very peculiar situation Friday.

Rocco, a slender little brown and black dachshund, happens to be just the right size and shape for exploring gopher holes. And that’s exactly what he did at a Salem, Kentucky cemetery on the afternoon of June 2.

Two off-duty Kentucky State Police troopers were mowing the cemetery grounds when they heard barking coming from a wooded area.

The troopers investigated and found a dachshund’s head poking out from the inside of a tree trunk.

KSP said the dog had apparently climbed through a nearby gopher hole which led into the tree. Unable to turn around, the dog got stuck.

The troopers enlisted the help of the Salem Fire Department after they tried to remove the dog on their own.

The dog, later identified as Rocco, was finally freed after a firefighter cut part of the tree with a chainsaw.

Rocco was then reunited with his owner.

Firefighters took the added precaution of making the hole bigger “should Rocco or another dog find themselves inside the tree again.”