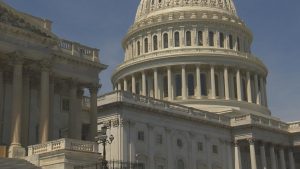 WASHINGTON, D.C. (NBC) – Lawmakers in Washington, D.C. are trying to debate police reform Wednesday. But Democrats, who’ve been pushing for reform are expected to block it.

Republicans’ police reform plan is up for a vote. Republican Senator Tim Scott from South Carolina said, “It is about those youngsters who today are afraid to jog down the street or get in their car and drive.”

Democrats plan to block it. They say the bill is fundamentally flawed. Senator Cory Booker (D-NJ) said, “The question simply is this: who do you trust on police reform in America? The NAACP or Mitch McConnell?”

The bill, crafted by the Senate’s lone black Republican Tim Scott, collects data and withholds federal funds from police that use chokeholds, but doesn’t ban them outright.

Republicans accuse democrats of hindering progress. Senator John Barrasso (R-WY) said, “We have Chuck Schumer with a chokehold on the Justice Act and our opportunity for police reform in America.”

In the meantime, President Trump is promising jail time for protesters who deface statues of Confederate leaders who supported slavery. “Vandals and these hoodlums and these anarchists and agitators,” the president said. “They’re bad people, they don’t love our country.”

Trump is drawing a rare rebuke from his predecessor, former President Barack Obama. “Facts don’t matter. Science doesn’t matter.,” he said. “…sees the Justice Department as simply an extension arm of the personal concerns of the president.”

Justice in Washington is under the microscope, and in turmoil.

The police reform bill needs 60 votes just to open up debate. That means seven Democrats have to cross over to allow it, and it’s not looking like that will happen.