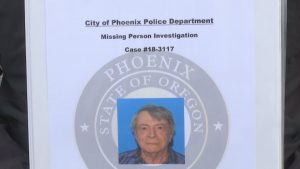 PHOENIX, Ore. — A body has been found inside missing former Mouseketeer Dennis Day’s Phoenix, Oregon home, according to police.

The family said they were informed by Oregon State Police that a body was discovered inside his Phoenix home early Friday evening during a search conducted Thursday.

The 76-year-old went missing over six months ago.

Neighbors said he told them he was headed out for a few days—that was the last time they saw him.

His car also went missing, later found along the coast with two people inside who are unfamiliar to Day.

Back in January, his family told NBC5 News they weren’t even aware he was gone until seeing the story on our newscast.

Friday night, the family says they’re just trying to digest what’s happening and are anxiously awaiting more information from police. The family says police have not told them the identity of the body. And in a release police say it has not been id’d.