Medford, Ore. — Police believe a woman in her late forties was driving under the influence when she hit a deputy’s patrol car and drove off just before 8:30 Monday night.

Medford Police say the woman was trying to turn onto Tahitian from Cedar Links and hit a Jackson County Sheriff’s deputy’s patrol car that was responding to a call.

The deputy tried to stop the woman and she led him on a short pursuit down Tahitian. He performed a PIT maneuver with the already damaged vehicle, stopping her at Rosewood.

The woman was taken into custody under suspicion of DUII and eluding police.

The deputy went to the hospital for some minor injuries. 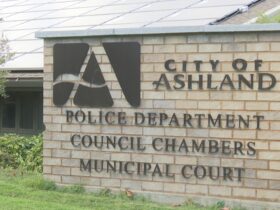