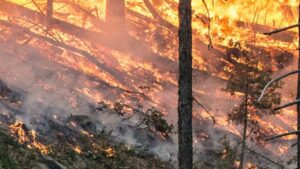 SOUTHERN OREGON — Some of your tax money goes towards dual fire protection, courtesy of rural fire districts and the Oregon Department of Forestry.

When that happens, it says ODF is responsible for containing the fire perimeters and natural resources, while rural fire districts focus on burning structures, evacuation and emergency medical services.

“You get a little bit of both, you get the forestry side of the firefight plus the structural side and there’s some cross-training and equipping that a lot of the departments have in order to support ODF on the fire ground,” said Prince.

He says in the last 2 decades, 900 fires have broken out and been contained with the combined efforts of his rural fire district and ODF.