JACKSONVILLE, Ore — Ahead of another dry fire season in 2022, the city of Jacksonville is teaming up with local and state agencies to protect the community from a disastrous wildfire.

Jacksonville Woodlands Association, Oregon Department of Forestry, Bureau of Land Management and other companies are beginning to treat lands throughout the city. Crews are largely focusing on land areas that are surrounded by homes – which include removing lower limbs of trees that they call, “ladder fuels.”

Bob Budesa, vice president of JWA, said if a fire were to reach one of the limbs, then it can quickly reach up to the canopy portion – ultimately causing it to spread.

The Woodlands trail is one of the areas being treated. The trail centers several homes that are dangerously at risk if a wildfire were to occur.

“It’s extremely important to homeowners that those fuels be reduced in order to save their homes,” Budesa said. “It’s all designed to reduce the impacts of a wind-driven fire, that may blow through here this summer.” 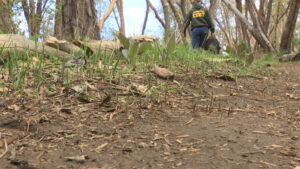 Budesa said the rapid spread of the Almeda fire in 2020, was an awakening and a reminder to be even more prepared for fires.

Jacksonville Fire Department Chief Wayne Painter, helped the city receive federal grants for a “firewise” program. The group is going through different neighborhoods to educate homeowners about the risk of fire near the property, and ways to reduce the impact.

“It can happen at any place,” Bedusa said. “We want everybody to become aware.  Understanding what we’re doing, and how we’re doing it, is extremely important.”

Bedusa said it plans to meet with officials later in the week to discuss other ways to utilize the grant funds. It’s also in the process of making dumpsters available for free to homeowners, to dispose of any fire-prone products.