On Tuesday, Commissioners discussed declaring a state of emergency or sending some form of resolution to Governor Kate Brown’s office over her vaccine mandate. Their concern is a wave of employees leaving the industry by not getting vaccinated before the deadline, or being approved for a medical or religious exception.

“This isn’t an anti-vaccine thing,” Commissioner Rick Dyer said Tuesday. “It’s just looking at what this particular mandate will potentially do to a lot of these workforces.”

“Declaring an emergency is one thing, asking for assistance is another, but telling the state how to get that assistance is not something we can do… It isn’t going to change anything for us or the mandate.” Jordan said. 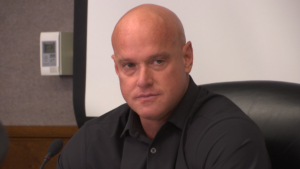 Jordan clarified his comments during Thursday’s meeting about hospitals being prepared for the loss of staff due to the mandate. He says he sent a request to the state to keep the current out-of-state nurses and Oregon National Guard members, who have been assisting at Providence and Asante hospitals since last month.

“[Hospitals] understand they’re going to lose some staff, and they understand that may require them to change the way they operate like limit access for care,” Jordan said in the meeting Thursday. “We’re attempting to assist the hospitals to avoid any implication that could negatively impact service.”

The Commissioners said it’s in the process of preparing the letter to send to the Governor’s office.

Jordan says he forwarded the threat to the Jackson County Sheriff’s Office for review. He declined our request for details about the threat and an interview on the story.

This remains a developing story and additional posts will be made as more details become available.