MEDFORD, Ore —  Downtown Medford will be the host to the first ever Juneteenth celebration this Saturday.

Black Alliance & Social Empowerment (BASE), is holding the event at Pear Blossom Park. 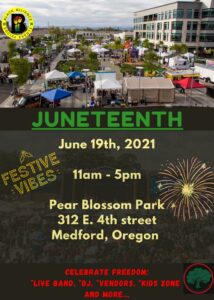 “We’re really looking to make this a really inclusive Juneteenth celebration,” Jessica Freedman, member of BASE told NBC5. ” “This will be one that will bring in a lot of people not only from all of the corners of the black community, but also across the Rogue Valley.”

Freedman says there will numerous activities for both adults and children Saturday. Black-owned vendors, musical artists and guest speakers will also be in attendance.

President Joe Biden officially recognized Juneteenth as the 11th federal holiday in the United States during a signing Thursday.