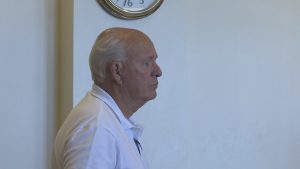 Skrah was indicted on 9 criminal misdemeanor charges in September of last year.

A motion was filed last week claiming Skrah had violated conditions of his release agreement by going on patrol.

Judge Roxanne Osborne denied a request to have Skrah booked on the latest charges, or placed under house arrest.

However, Sheriff Skrah must still refrain from going on patrol, and can only drive his personal vehicle.

A trial date of October 13th has been set for the contempt of court charges.