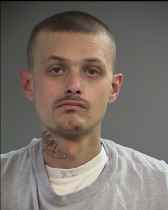 Medford, Ore. — Police arrest a man with an outstanding warrant after leading them on a foot chase.

Medford Police say an officer stopped a car at Columbus and Locust Thursday night when the officer found the driver had a warrant out for his arrest.

According to police, 29-year-old John Galaviz jumped from the car and fled while holding a shotgun and later threw the shotgun during the chase.

He also had to be tazed when he resisted arrest.

Galaviz faces a laundry list of charges including attempt to elude and prohibited possession of a firearm.