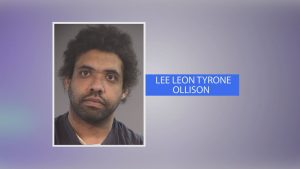 MEDFORD, Ore. — A Medford man is been arrested after allegedly attempting to kidnap two preteen girls.

According to Medford Police, Ollison called out to the young girls, telling them to get into his car and began counting down.

Ollison told police that he believed the 11-year-old girls were his daughters.

“We do want people to know that this is very rare. It’s a good reminder, though, to teach your kids about what to do if they’re in a situation like this. The good news is that these girls acted, they ran, they created distance,” said Lieutenant Mike Budreau with the Medford Police Department.

Budreau says Ollison has a criminal history, including drug charges and appeared delusional when arrested.

Ollison is on parole for arson.