SAN DIEGO — Medford’s own Dylan Wu, is preparing to making his PGA debut at the U.S. Open this Thursday.

Wu, 24,  is currently on the Korn Ferry Tour. Its a mostly developmental league just below the Professional Golfers’ Association (PGA). He qualified for the U.S. Open after coming in second at a tournament in Maryland on June 7th.

“I never played in the US Open before and yeah I’m really excited for it,” Wu told NBC5. “Last year I had a chance to qualify for the US Open and I barely missed it, so this was little bit of redemption.”

Wu graduated from St. Mary’s in 2014, before finishing his academic studies at Northwestern University just outside of Chicago. He was named All-American three times during his collegiate career.

Wu’s father introduced him to the sport when he was a kid. The first golf tournament Wu ever watched, was the US Open at the Torrey Pines Golf Course in San Diego.

Now, 12 years later, he’ll be there on center stage.

“To be able to play in a tournament with the best players in the world, is always an honor.” said Wu. 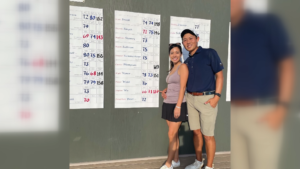 Wu is scheduled to tee off at 2:45 Thursday afternoon. The tournament will be aired live on NBC.