MERLIN, Ore —  Grayback Forestry which has locations in White City and Merlin, is looking to secure its team for this upcoming fire season.

During the summer months, Grayback crews spend time battling fires in Oregon and across the country. After last year’s devastating fires in the Pacific Northwest, the company wants to recruit as many firefighters as it can. 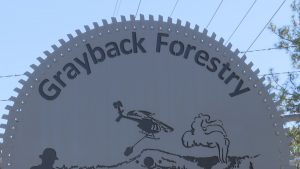 “Last forecast I saw, we’re still looking at drought through most of the western states,” Jake Adams with Grayback Forestry told NBC5. “I’m anticipating to have a pretty rough go ahead this summer as well and I think we’re going to be awfully busy.”

Starting wages for entry level positions increased this year to $17.54 an hour. Grayback’s White City location has about 80 positions ready to fill and plans on finalizing teams by early July.