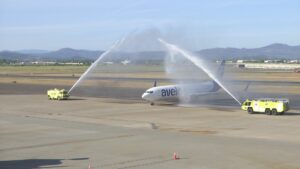 Avelo Airlines is offering one-stop routes between Hollywood-Burbank Airport and 11 other destinations along the West Coast, including Medford.

Kicking off its service, the airline is offering introductory one-way fares at $19.

The first flight into Medford was greeted with a water arch from the MFR Aircraft and Firefighting Rescue.

“We’re really, really humbled to be part of the first round of Avelo’s service. Not only will we be sending people to L.A.’s wonderful basin, but we expect the L.A. basin will also be coming up here,” said Airport Director, Jerry Brienza.

Travel Medford was also there to celebrate with a ‘Taste of the Rogue’.

Complimentary tastes of Cliff Creek Cellars wine, Caldera Brewery beverages, and Harry and David truffle chocolates were available for travelers to test out.