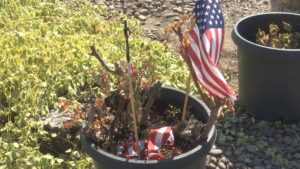 MEDFORD, Ore. — People living on the 2000 block of Delta Waters Road in Medford woke up to several of their personal American flags burned and other personal property damaged.

Some of the victims also had other flags supporting law enforcement burned.

A Vietnam veteran had his truck tires slashed.

In 20 years of living in the house, he’s never had an issue before.

He calls it disheartening.

“I lost both legs in Vietnam and this is what I get. I gave up almost my life for my country and if people are going to start doing this, we’d better wake up,” John Waldrop said.

“And down the road there was another gentleman that had his work truck with two flags in the back of his work truck and he had those replaced today, as well,” neighbor, Nikki Van Sickle, said.

Anyone with any information should call Medford police and refer to case#20-11764.