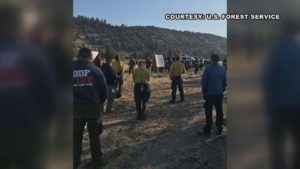 LAKE COUNTY, Ore. — The safety of fire crews has an added layer this wildfire season with COVID-19 risks both in the field and in camps.

The Ben Young Fire in Lake County has crews from the U.S. Forest Service, Oregon Department of Forestry and Bureau of Land Management working it.

Health is a top priority with around 200 people working the fire so virtual communications are increasingly common.

To avoid one large fire camp, firefighters are spread out near the fire in several smaller camps, with individual crews staying together.

“It’s a different way of doing business today,” Bryan Hunt, Health Liaison for Pacific Northwest Team 7 said. “It’s not a traditional fire camp, but we’re rolling with the punches and we’re making it work. We’re trying to answer questions they may have. They basically just want to be healthy so they can work. I basically want to provide a safe environment so they can work,” Hunt added.

Each crew member is asked a daily health questionnaire, proper distancing is required as well as masks, and regular hand washing.