SALEM, Ore — Oregon residents are testifying before state representatives and senators virtually over redistricting throughout the next couple of weeks.

Senator Cliff Bentz represents district two. It covers 20 counties including all of southern Oregon except Douglas, Curry, and parts of Josephine County. It’s one of the largest districts in the country and the only one in the state represented by a republican. 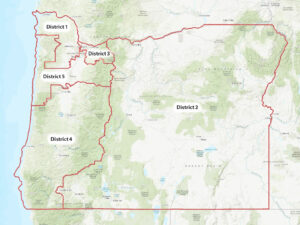 The bipartisan committee is led by two state senators and two representatives for both democrats and republicans.

“We got good working relationships with our committee,” District 27 State Senator & Vice Chair for the Senate Committee on Redistricting Tim Knopp said. “We’re working to try to have a good bipartisan, non partisan plan.”

It’s possible district two and others in the state could be split. State leaders also speculate adding a sixth district if the population increases.

Due to the coronavirus pandemic, Census data may not be released until later in the summer and past the Legislature’s July 1st deadline.

In a joint letter, the Committee requested an extension of their due date from the Oregon Supreme Court.

If the Court does not grant the extension, then the redrawing of districts falls into the hands of newly elected democrat Secretary of State, Shemia Fagan.

You can participate in the hearings through the Oregon Legislature’s website:  https://www.oregonlegislature.gov/redistricting/

“Over the last several weeks, the Secretary of State’s office has been in regular communication with legislative leadership about the unprecedented delays in Census data and the questions that it raises around redistricting this year. The Senate President, the House Speaker, and I are all in agreement that the Oregon Supreme Court is the right venue to seek clarity on how redistricting is conducted this year. Though the name of this petition may suggest we are adversarial, the caption is merely a formality to provide clarity to a process in which both the Oregon Legislature and Secretary of State have a Constitutional obligation to Oregonians.

“As Oregon’s chief elections officer, I am responsible for ensuring the accessibility, predictability, and security of Oregon elections in 2022. I have significant concerns about the Legislature’s request to move redistricting deadlines into 2022. Such a move would likely have cascading effects and require the Legislature or the Court to move the 2022 primary election to an uncertain date. I have consulted with our Elections Director and the county clerks. I share their concerns that disrupting 2022 election dates would lead to a significant disruption and voter confusion over next year’s elections. We have shared these concerns with legislative leadership and will be presenting the Court with a simpler option that preserves the Constitutional duty of the legislature to do redistricting but in a manner that is timely and does not disrupt Oregon‘s 2022 elections.

“My commitment in this process is to ensure that Oregonians from all walks of life are front and center. Maps must be fair, drawn in a timely manner, and the people of Oregon must be given adequate opportunity to have their voices heard. Accountability measures should remain in place if the Legislature is unable to complete its work, and Oregonians must maintain their right to challenge the maps under the Oregon Constitution and related laws.

“In the coming months, I look forward to working collaboratively with the Legislature, helping to promote their work, and engaging Oregonians in all corners of the state, including Black, Indigenous, Latinx, other communities of color, and historically underserved communities in this process. Together, we can ensure all Oregonians have the fair, equitable representation they deserve.”