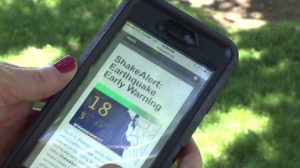 ORE.- The ShakeAlert Earthquake Early Warning system will go into effect tomorrow here in Oregon. ShakeAlert offers seconds of advance notice so the public can take action to mitigate injuries and casualties and infrastructure damage.

In a webinar today, experts from across Oregon explained how the alerts work and what the public can anticipate.

They said the amount of warning Oregonians will get will vary depending on their location. But they say those critical seconds not only allow individuals to take cover and get safe, but also help automated critical infrastructure to mitigate damage, like turning off water flow or open the bay doors of fire stations.

The rollout of ShakeAlert tomorrow marks a decade since the Japan earthquake and tsunami, the catalyst for earthquake warning plans in Oregon and across the west coast.

Officials clarified that the Shake Alerts will not be tested tomorrow- they are simply flipping the ‘on’ switch. They hope to test the earthquake alerts later this summer.