SALEM, Ore. — The Oregon Forest Resources Institute is being asked to improve its performance and operations following an audit conducted by the Secretary of State’s Office.

The audit claims the state agency’s public research and advertising efforts may be working to shift public opinions and attitudes to favor the forest industry, rather than providing objective information.

The Beaverton-based OFRI was established back in 1991 to create forestry education programs and materials. 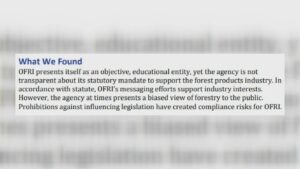 It’s at risk of statutory non-compliance after participating in various events and outreach activities that covered controversial topic areas, which may have catered to policymakers.

The Secretary of State’s audit says between 2019 and 2020, the agency’s content garnered over 52 million impressions across advertising, digital media, online streaming, and trade print.

“The Oregon Forest Resources Institute audit demonstrates how critical it is for public-funded agencies to be transparent and accountable to Oregonians,” said Oregon Secretary of State, Shemia Fagan.

It said: “We agree with the operational recommendations in the audit regarding ways to improve our performance. Indeed, we’re already in the process of implementing them.”