WHITE CITY, Ore. – A girl in White City is hiding inspirational notes throughout the community in hopes of people finding it and bringing a smile to their faces.

11-year-old Marlie Kirk and her family create the notes with a penny attached to them for “good luck.” They are scattered in different areas and public buildings throughout White City for people to find.

“We just want to brighten up their day and make them happy,” Kirk said. 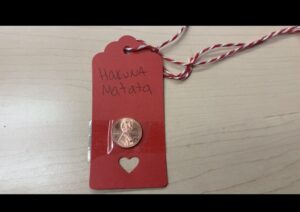 Marlie has a rare disease called Ehlers-Danlos syndrome, or EDS.  According to the Mayo Clinic, it’s a bleeding disorder and makes joints overly flexible.

Her mother Brandy found out about “Tiny Superhero” through Facebook. The organization was founded in 2013 in Webster Groves, Missouri which is about 12 miles outside of St. Louis.

Tiny Superhero aims to uplift children around the globe battling rare illnesses or disabilities by supplying them with a cape. According to their website, “since 2013 Tiny Superheroes empowered over 60,000 kids all over the world.”

Each month, heroes have to complete missions to earn a patch for their cape. This month’s goal was to hang as many inspirational notes around the community as they can.

The Kirk family surpassed 50 notes so far this week. With the positive responses received so far from people that found them, they don’t plan on stopping anytime soon.

“The more encouragement we feel from giving them out, the more were going to make to keep it going,” Marlie’s mother Brandy said.