Police were called to the parking lot on the east side of the Rogue Valley Mall near Bed Bath and Beyond around 10:23 p.m. Detectives did not indicate what led up to the shooting, but shared the victim is being treated and is expected to survive. 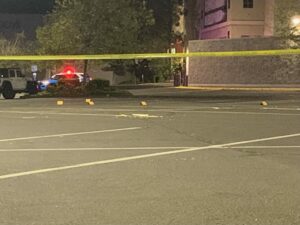 Several shell casings were found in the lot but the exact number of shots fired is unknown. According to MPD, multiple vehicles were seen fleeing the scene, but a suspect (s) is not in custody as of Sunday.

There was a carnival being held in the parking lot around the time of the shooting, but is not included in the investigation. Detectives spent the night talking to witnesses at the scene.

NBC5 received video shared on social media of people running from the mall – with the caption, “gunshots at the fair.”

“The carnival really isn’t involved in the scene even though that was occurring at the time,” Sgt. Joshua Schilder, Medford Police Department, said. “This is going to be an active investigation over the next few days.”

Eleyda Ruiz-Cabrera said she was home at the time her husband and kids were at the carnival. Her family is safe, but she said it was the scariest call of her life.

“My husband called me and I could hear lots of screaming and chaos,” Ruiz told NBC 5. “I noticed there was a lot of panic in his voice. He told me there was a shooting at the carnival and I immediately thought the worse.”

This remains a developing story and more details will be updated on this article as it emerges.