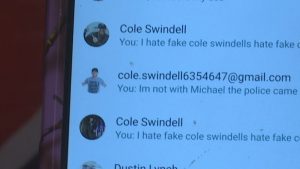 EAGLE POINT, Ore. — Whether it’s a prince from a foreign country or a warrant because you didn’t show up for jury duty, scammers are coming up with more creative ways every day to take your money.

She says the two developed an emotional attachment and it got so serious, it almost jeopardized her current relationship.

Lloyd says she’s been talking to Cole Swindell through unverified accounts on Whatsapp, Facebook, and other platforms. She says he kept asking for thousands and thousands of dollars and also sent her money in the form of fake checks.

Now, she’s starting to accept that it isn’t the music star after all.

“He called me his wife ever since… told me he was going to get my 50k worth of gifts July 26th when he was here,” said LLoyd. “He even had me believing when he was in Tennessee for three days that he was coming then.”

According to the FBI Internet Crime Report for 2017, Americans lost more than 200 million dollars to romance scams that year. The Jackson County Sheriff’s Office says scammers are an ongoing problem and they receive several complaints every year, but it should always be a red flag if people ask for money.

When it actually comes to going after these people, police say it’s very difficult. Most of the time the suspect is completely unknown and may even be out of the country.