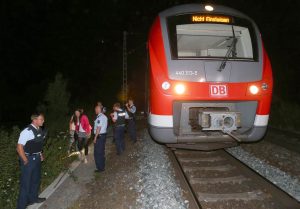 Heidingsfeld, Germany — A man armed with an axe and a knife attacked passengers aboard a train Germany Monday night, severely injuring three people before he was shot and killed by police.

NBC News reports the attacker was a 17-year-old Afghan man. Bavaria’s interior minister said police shot the attacker after he exited the train and charged them.

Police said it is too early to determine a motive or whether the attack may be terrorism related.