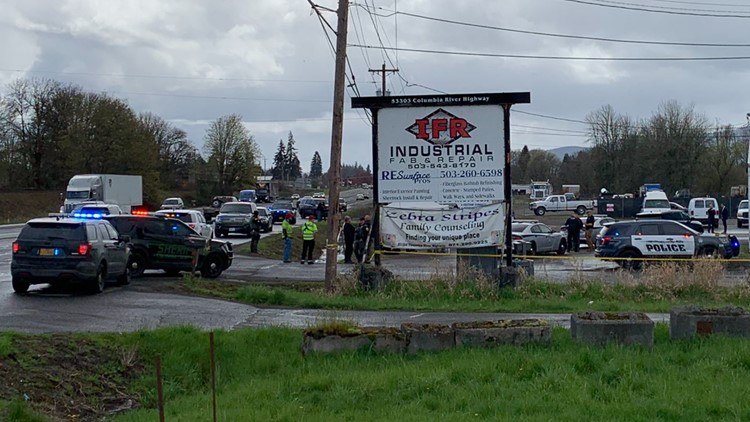 SCAPPOOSE, Ore. (KGW) — A man was shot and killed by law enforcement at a tow yard in Scappoose on Thursday morning, according to the Washington County Sheriff’s Office (WCSO).

WCSO detective Shannon Wilde said law enforcement was called out to Grumpy’s Towing, located at 53279 Columbia River Highway in Scappoose, just before 10 a.m. Thursday for a “disturbance.” Shortly after they arrived, Wilde said an Oregon State trooper and a Columbia County deputy fired their weapons and a man was shot and killed. No officers were injured, according to a tweet from Columbia County.

Erik Tyler, a witness who works at a neighboring business, spoke to KGW’s Mike Benner about what he heard.

“It was quick, at first I thought it was someone working on a house with nail guns,” Tyler said. “And then I realized my wife was out front and I had my dogs and I heard, ‘pop, pop, pop,’ and I realized it was guns. … I got everyone inside, we laid low for a little bit, waited for the cops to come tell us we’re alright.”

Tyler said he heard police yell out multiple times to put down a weapon or they would use force and shoot. He said he heard two shots and then one shot. Wilde said she could not confirm if the man killed had a weapon or fired a weapon.

According to Wilde, after the man was shot and killed, law enforcement learned he was wanted for a violent felony. She did not say what the felony was and said law enforcement was not called out for that reason, but because of the disturbance at the tow yard. Wilde did not identify the man and said she didn’t know when more information about the man will be released.

The WCSO Major Crimes Team will lead the investigation into the shooting. Wilde said she expects they’ll be at the scene “well into the night.”