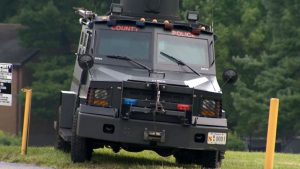 Randallstown, Md. (WBAL) — A woman was killed and a child was injured in Maryland after being shot by police during a six hour stand-off Monday.

The incident began in the morning when police tried to serve an arrest warrant on the woman, Korryn Shandawn Gaines, for multiple charges.

Upon arriving at the scene, officers found her armed with a juvenile in the apartment with her. She threatened officers several times.

Six hours into the stand-off, the woman pointed the gun and made a clear threat, prompting an officer to shoot. She returned fire.

No officers were injured but the five-year-old boy was shot in an extremity and suffered non-life-threatening injuries.