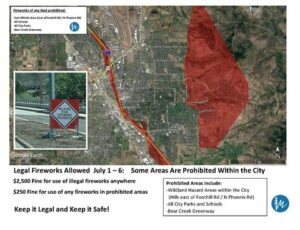 MEDFORD, Ore. – The Medford City Council voted to not ban fireworks this Fourth of July.

Fireworks are legal in Medford city limits, with the exception of certain prohibited areas, from July 1 through July 6. This year will be no exception after the city council decided to forgo a ban, instead urging residents to “educate themselves on the use of fireworks.”

There are large sections of the city where there is a prohibition on the use of fireworks. They include the “Wildland Hazard Area” east of Foothill Road and North Phoenix Road, all city parks and schools, and the Bear Creek Greenway.

Medford’s neighbors to the south, Phoenix and Talent, both banned the use of fireworks this year. Fireworks are always banned in Ashland.